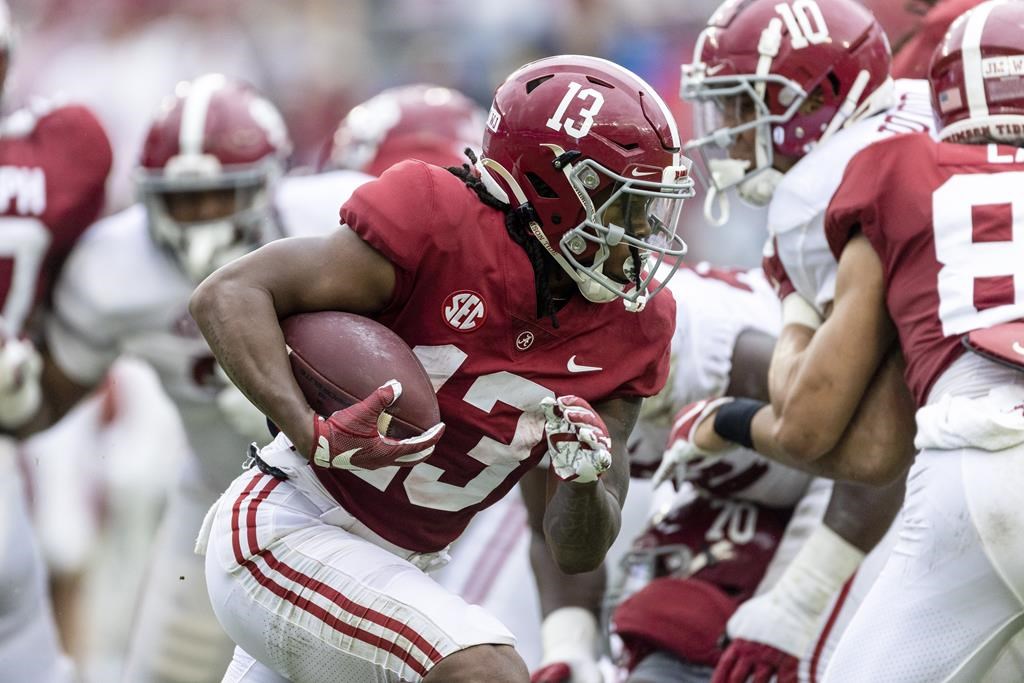 The superlatives have been flying from Jahmyr Gibbs’ new Alabama teammates.

They’ve called the Georgia Tech transfer “definitely electric,” “a special talent” and “very dynamic.” It’s a lot to live up to for the top-ranked Crimson Tide’s new tailback, who is set to make his ’Bama debut Saturday night against Utah State.

“Jahmyr Gibbs is definitely electric, fast,” Tide offensive lineman Kendall Randolph said. “He’s got some quick feet so he can make the cuts. To block around him is a great honor first and foremost, because he’s a great athlete. We do what we can to make him successful.”

Gibbs is the headliner of a deep backfield that has produced star after star with Derrick Henry, Najee Harris and Brian Robinson Jr. among the most recent crop.

While they each had to wait their turns to some degree or other, Gibbs has seemingly been penciled in as the lead back since his arrival in Tuscaloosa. A 75-yard touchdown run in the spring A-Day scrimmage in front of fans certainly didn’t hurt his case.

Gibbs brings versatility to a backfield that also has Jase McClellan and Roydell Williams back from injuries, along with Trey Sanders and two highly rated freshmen. The 5-foot-11, 200-pounder is also returning kicks and he had 36 catches last season for Georgia Tech.

He figures his receiving ability is his biggest strength.

“That’s what the NFL likes so I try to do my best to model my game after Christian McCaffrey or Aaron Jones,” Gibbs said. “Players like that who catch out of the backfield.”

The precise pecking order and roles in the backfield are to be determined. Robinson was the bruising 225-pound workhorse at a position that was decimated by injuries, forcing two players to switch position for depth.

Like Gibbs, McClellan proved to be a receiving threat out of the backfield before a season-ending knee injury. Williams averaged 5.9 yards per carry before his season ended with his own knee injury.

McClellan said the backs are happy to have Gibbs, even if it could mean diminished roles.

Freshmen Emmanuel Henderson and Jamarion Miller also join the mix. But Gibbs is the X-factor with the explosive speed and big-play ability in three different facets of the game.

“He’s different. Very dynamic, can do anything,” Tide defensive lineman DJ Dale said. “Run the ball, catch the ball, he’s shifty. He got me (recently) at practice in team run. He made me stop my feet and he stopped and kept going and he was gone. He’s a very dynamic piece to the offense and I’m glad we have him.”

The backfield depth and talent could mean at least some more balance on offense. With Heisman Trophy winner Bryce Young racking up huge numbers, Alabama passed for nearly 3,000 yards more than it rushed.

Not exactly the traditional ‘Bama balance, though the Tide’s top three receivers are gone.