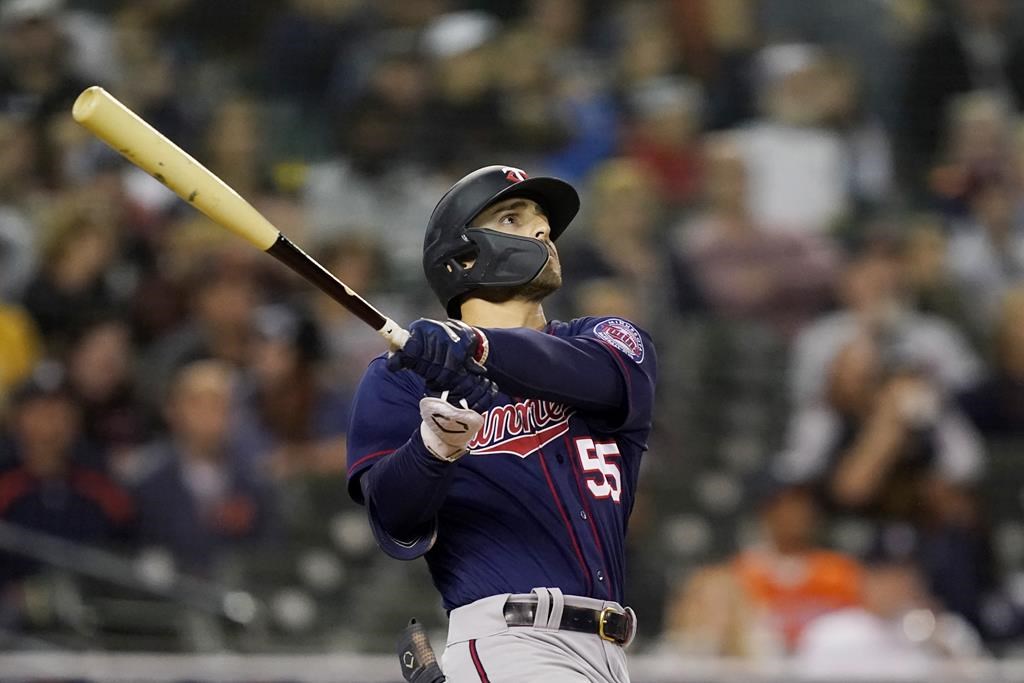 DETROIT (AP) — Eric Haase had three hits, including a home run, and the Detroit Tigers beat the Minnesota Twins 3-2 on Saturday night.

The Tigers have won seven of eight. The Twins will have to win their final four games to finish with a .500 season.

With the score tied at 2 in the sixth, Javier Báez was hit by a pitch from Ronny Henriquez (0-1). Báez moved to second on a fly ball. Harold Castro grounded to first baseman Luis Arraez, but he missed Henriquez with his throw, allowing Báez to score the go-ahead run.

Daniel Norris (2-0) picked up the win with 1 1/3 scoreless innings. Andrew Chafin picked up his second save after A.J. Hinch used closer Gregory Soto in the eighth.

After being shut out for the 22nd time on Friday — the most by an AL team in the DH era — the Tigers only needed three batters to score. After Akil Baddoo flew out, Riley Greene singled to right and the ball got by Matt Wallner for a two-base error. Báez followed with an RBI single.

The Tigers added a run on Eric Haase’s fourth-inning home run, but Mark Contreras made it 2-1 with a lead-off homer in the fifth. Two of the next three batters singled, bringing Jose Cisnero out of the Tigers bullpen. He struck out Jose Miranda, but Gio Urshela tied the game with a base hit.

Miranda led off the eighth with a base hit, and the Twins put in Billy Hamilton as a pinch runner. Alex Lange threw his 15th wild pitch of the season, moving him one ahead of Shohei Ohtani for the major-league lead, and Hamilton took third on Urshela’s ground out.

Soto walked pinch-hitter Gilberto Celestino and Gary Sánchez to load the bases. Pinch-hitter Ryan Jeffers hit a ball up the middle, but Soto deflected it with his glove to start a 1-6-4-3 double play.

Arraez got his second hit with one out in the ninth, but right fielder Victor Reyes made a diving catch of Carlos Correa’s line drive before Chafin retired Nick Gordon to end the game.

WELCOME TO THE MAJORS

Brendon Davis made his major-league debut for the Tigers, playing third base. He flew out in his first at-bat before striking out twice.

The teams finish their season series on Sunday afternoon. The game will start at 12:10, less than an hour before the scheduled start of the Lions-Seahawks game across the street at Ford Field. Joey Wentz (2-2, 3.54) will start against an unannounced Twins starter.