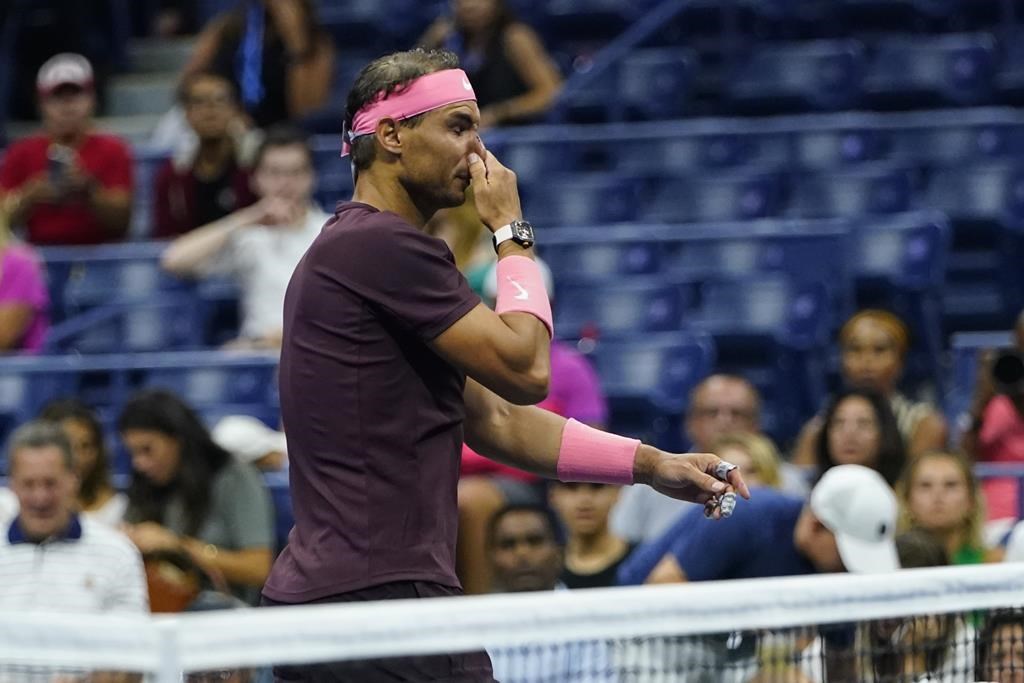 NEW YORK (AP) — Rafael Nadal cut himself on the bridge of his nose with his own racket when it ricocheted off the court on the follow-through from a shot, leaving himself bloodied and dizzy during his second-round victory at the U.S. Open.

Play was delayed for about five minutes during a medical timeout in the fourth set of what would become a 2-6, 6-4, 6-2, 6-1 win against Fabio Fognini at Arthur Ashe Stadium in a match that began Thursday night and finished after midnight on Friday.

It made for a bizarre, and briefly scary, scene, as Nadal immediately grimaced, dropped his racket, put a palm to his face and then put both hands on his head. At least Nadal could joke about it afterward during his on-court interview.

Asked whether he’d ever had that happen before, he mustered a chuckle and replied: “With a golf club but not with a tennis racket.”

How was he feeling?

“Well, just a little bit dizzy at the beginning,” said Nadal, who has won four of his 22 Grand Slam titles at the U.S. Open, most recently in 2019, the last time he entered the hard-court tournament. “A little bit painful.”

The episode came on the first point of the game with Nadal leading 3-0 in the fourth set and clearly in command after ceding the opening set for the second match in a row this week.

The 36-year-old from Spain was moving to his right when he hit a backhand. After making contact with the ball, his racket deflected off the ground and smacked him on the nose.

He went over to the sideline and layed down, waiting for the trainer, and Fognini went over to check on Nadal. After having a bandage put on his nose, Nadal resumed play. He would lose that game, but not another, improving to 21-0 in Grand Slam matches in 2022.

Credit: Nadal’s nose bloodied by own racket at US Open in victory