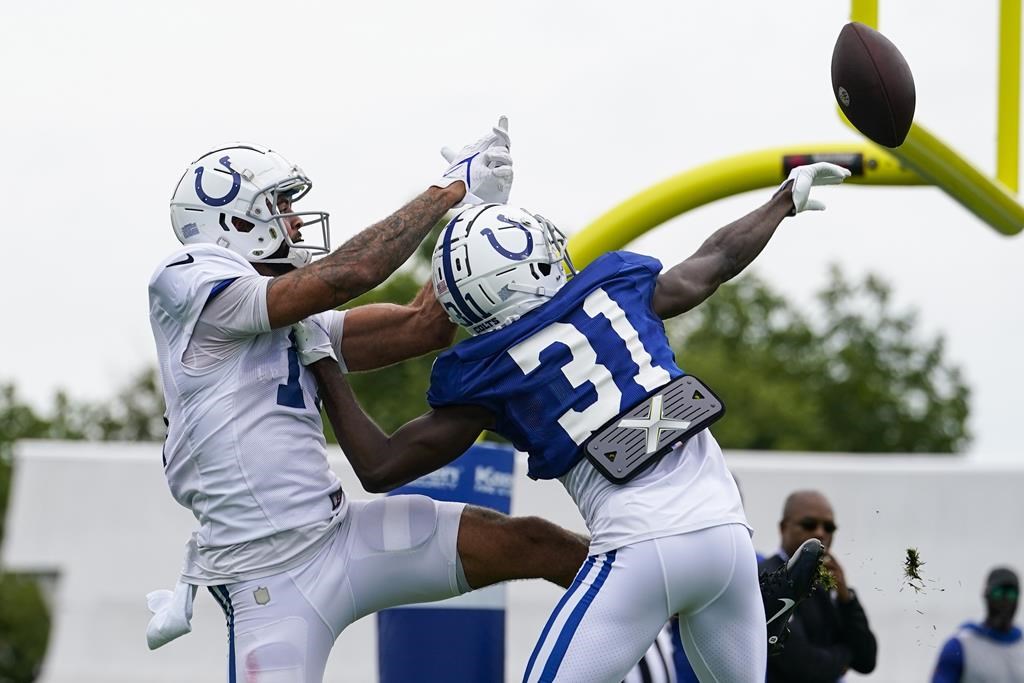 WESTFIELD, Ind. (AP) — The Indianapolis Colts pulled on their helmets and pads Tuesday and quickly returned to work.

For the first time since enduring one of the most bitter defeats in recent franchise history, they were focused squarely on football. No, they weren’t hitting at full speed, nobody was keeping score and there were no skirmishes to report from the first full training camp practice.

But after spending nearly seven months thinking and rethinking what went wrong that disappointing day in Jacksonville and contemplating their next moves, Colts players finally got a fresh start.

“It’s different,” quarterback Matt Ryan said, referring to the addition of pads. “The intensity level, just how things go on around you when there’s actual contact, it all starts today. The work we’ve done up until this point is important but it changes and you’ve got to adjust to that, got to get used to that.”

Ryan is still getting acclimated to his new team, which was evident as the defense held the upper hand during most of Tuesday’s red zone drills.

While the 2016 league MVP wasn’t around for Indy’s embarrassing 26-11 playoff-eliminating loss in January, he understands.

In 2017, Ryan and the Atlanta Falcons returned to training camp answering similar questions as they tried to rebound from an epic Super Bowl collapse against New England. Atlanta has won only one postseason game since blowing the 28-3 lead.

The comments sound awfully familiar, too.

Three-time All-Pro linebacker Shaquille Leonard asked his teammates to let the feeling “burn” throughout the offseason. Defending NFL rushing champ Jonathan Taylor said he spent those months fixing the flaws he saw on tape so he could avoid a repeat. And when two-time Pro Bowl defensive tackle DeForest Buckner arrived, he didn’t mince words.

“We shot ourselves in the foot,” he said. “It came to the point where we needed that one more win and you know we didn’t come through and it was a terrible feeling. It lingered for a while. Coming into this offseason, offseason team activities, we mentioned it and then put it in the rear view, pressed on and moved forward.”

The reminders linger, though.

General manager Chris Ballard responded to Indy’s inexplicable collapse by trading Carson Wentz to Washington and replacing him with Ryan, a four-time Pro Bowler with a friendly personality and penchant to lead.

All three moves are perceived as significant upgrades.

Reich even changed the training camp schedule following an eighth straight opening-day loss and last year’s 1-4 start. He moved back the typical starting times of practice form mid-morning to mid-day in hopes of a better start this season.

“You’re always looking for ways to get better,” Reich said. “We just kind of get the guys a little bit more rest, start a little bit later in the day, just the quality of sleep, right? For these guys, sleep is important so let them sleep in a little bit longer and make sure they’re getting the amount of rest, so that when we practice we can be at high speed, high functioning and high execution.”

So far, it appears to be working.

Though Indy has missed Leonard’s energy on the field while he remains on the physically unable to perform list following back surgery in June, there were plenty of exciting plays Tuesday.

Whether it was Gilmore blanketing rookie receiver Alec Pierce near the sideline, linebacker Bobby Okereke breaking up a pass or Taylor making a cut that impressed Ryan, the large crowd helped create a different atmosphere from last week when the Colts first reported to the Grand Park complex in suburban Indianapolis last week.

“This is football, football is played in pads and you have to really focus on run-fits, tackling and all those sorts of things matter,” new safety Rodney McLeod said. “It was very competitive and that’s what you want to see.”

The question now is whether it will make a difference when Indy opens its season Sept. 11 at Houston or in their home opener Sept. 18, the long-awaited rematch with Jacksonville, which has had two of its four wins over the past two seasons against Indy.

“I know everybody’s going to be asking about Jacksonville for a while because hell it’s five months now and you’re still wrapping you’re brain around how that could happen with the team that we had,” starting center Ryan Kelly said when asked in June about last season’s finale.

“I think as much pain as there was last season, the way we started it and finished it, I think with some of the signings that we’ve got I think that turns into a lot motivation.”